Georgia duo Clay "Uncle Snap" Sharpe and Brian "Rooster" King actually had quite some success as the LACS, the Loud Ass Crackers, taking two albums "KEEP IT REDNECK" (2013) and "OUTLAW IN ME" (2015) into the Billboard Top Country Album Charts and doing the same in the Rap Album Charts. But their mixture of Rock, Country, Hick Hop (their self-named version of Rap), and Southern Rock didn't fare too well with radio programmers, not giving them one single worth of airplay. But they kept touring, mostly attracting millennial frat-boys and wanna-be gangsters, basically appealing to an even lower common denominator as Nash-Trash country does to suburban middle-aged soccer moms and acne-ridden Teenie Boppers. 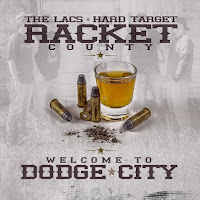 Probably to avoid disappearing in the sweet nothingness after their 15 minutes of half-ass fame, they now bonded together with Floridians trio Hard Target and came up with the equivalent of Hick Hop's Florida Georgia Line and the real scary name Racket County. A new label, Barn Burner Records was formed to accommodate the new outfit, while they are still relying on Average Joe's Entertainment distribution.

A debut album of the fat as in overweight (their own description) quintet, with the cliched title "WELCOME TO DODGE CITY" and brandishing whiskey and bullets, is scheduled to be released on August, 5th.

A first single "Sunday" with a sham tropical island groove and to add insult to injury a fake Jamaican accent over the infantile rapping style was released with a video more alluring to bro-country than to real gangsta rap. The guy who came up with the "fishin' and hookin' up" line must be a real genius.