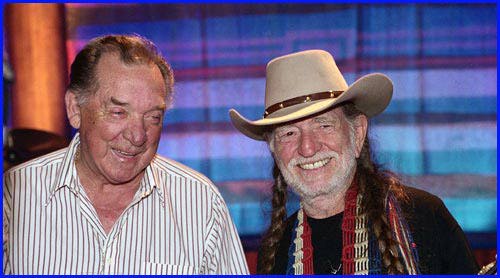 In 2013 as Ray Price knew he was dying, he went back into the studio to record his last album "BEAUTY IS..." hiring producer and this year's"Country Music Hall of Fame"-inductee, Fred Foster as well as string arranger/conductor Bergen D. White.
Foster was quoted about Ray and the recordings: "He called me in 2012 and said, 'I think I have one album left in me; I’m not well, you know. I want to do one last one, and I want you to do it with me.’" Foster was influential in Ray Price's early career and got him to sing in his own style instead of trying to imitate Hank Williams. Shortly thereafter Ray came up with his own signature song, the country 4/4 shuffle. Vince Gill was asked by Ray to sing harmony on two of the tracks. The album, which was released by AmeriMonte Records four months after Ray's passing, also contained a track written by Ray's old pal, Willie Nelson. The whole project was recorded in a converted church, at Ocean Way Nashville Recording. 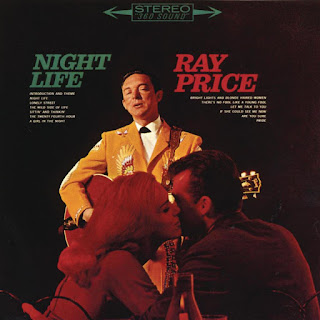 Fast-forward to today, not only is today Fred Foster's 85th Birthday (7/26) but it was also announced that Willie will release "FOR THE GOOD TIMES: A TRIBUTE TO RAY PRICE" on September, 16.  And yes, Willie went into the same studio, got Fred and Bergen as producer and arranger and invited Vince Gill and his traditional Country/Western Swing Outfit "The Time Jumpers" to be the backing band on the more country-heavy half  of the dozen tracks. The whole project doesn't come as a big surprise, Willie as an aspiring songwriter used to work for Ray Price's publishing company and for a short time in 1961 was even playing bass behind Price as a Cherokee Cowboy. Ray also recorded several songs written by Willie, 'Night Life", "I'm Still Not Over You" and "It Always Will Be" are included here. Besides Willie's songs, there are two by Hank Cochran, one by Bill Anderson, Roger Miller, Harlan Howard, the Bob Wills classic "Faded Love," the Ralph Mooney/Charles Seals classic "Crazy Arms," Kristofferson's "For The Good Times" and the Ray Price/Rusty Gabbard shuffle "I’ll Be There (If You Ever Want Me)."

Over the years Willie and Ray recorded several projects together, as examples Willie's "SAN ANTONIO ROSE" or the concept album "LAST OF THE BREED" which was also produced by Foster and featured Merle Haggard. This is a great album showcasing the deep friendship between Willie and his former boss.

Balanced by honky tonk heavy fiddles (Kenny Sears) and pedal steel (Paul Franklin) to the string arrangements for the countrypolitan sound that Ray also created, the tribute covers a wide variety. Also worth mentioning is the art work of the album - basically it looks like Ray's "NIGHT LIFE" album from 1963.

Tracklist for Willie Nelson's For the Good Times: A Tribute to Ray Price:
"Title" (Songwriters) and chart placing 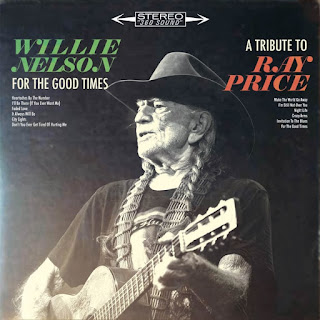