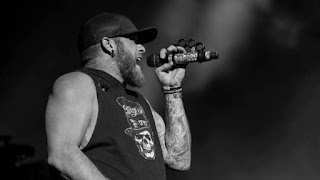 Oh Lord, please let me work with no pay through this weekend. , so I don't have to listen to Brantley Gilbert's new single "The Weekend" which he released today (7/22) through the IHeart country radio stations. The song immediately climbed into the Top-10 of downloader itunes.

The song is so stupid that if we take one IQ point away from each writer - Brantley himself and Andrew DeRobert - a guy he never met, according to the video below - they would both function with photo-synthesis as daisies in the room.

Don't believe me how stupid the song is - read for yourself:

Tick tock, I'm on the clock and I'm feeling like
This job's just 9 to 5'in my life away

Really the tough guy with all the tatts is working a desk job from 9 to 5, whatever happened to country boys working from sunrise to sunset. There must be some pussy willows growing in Georgia.

It's like I'm back in school and I'm in the last class
And I'm passing time until the bell ring,

That's the line for your teenie fans, who haven't gravitated, sorry graduated from school. Next he's gonna put a line in about some kinder gardeners about not finding their pacifiers. But hold on it's all getting better...

Having visions of summertime
Wait a minute now, that's just later tonight
Tan legs and tailgating, it's all up in the moonlight
And by the way,

There it is, the tailgate - darn I missed that line, haven't heard it before. And oh well, the female partner just got reduced to tan legs, no personality, brains whatsoever. Just tan legs - wow man. I fucked her because she had tanned legs. You are such a macho Brantley. Well let's see what the chorus brings - I'm sure there must be a hook in there somewhere:

I wonder if I should even comment on this - pretty much says it all. Pubescent fantasies or in other words; masturbating to a "Girls Gone Wild" video tape and to be the "big gangsta" (that's what BG stands for, I think) we wake and bake one and appeal to the fraternity of stupidity. It doesn't get any better in the second verse either, if we even can call it a verse with its four lines of master poetry. The fact that you don't drink, bake and drive is the only laudable line in that whole mess of a song. Love the Yeti product placement, I'm sure that's gonna help them with their IPO.

Backwoods looking like Panama City
A bunch of jacked up trucks and bikinis
Got a Yeti full of good ideas
Like I ain't worried 'bout driving, I'mma stay right here

And after that mini verse we go to another chorus and then the bridge; there must have been some geniuses at work here, coming up with a reality check about church on Sunday and then going back to work on Monday, but oh no we don't wanna talk about that.

The chorus and the outro finally finish the song and let us catch our breath again until the next weekend rolls around. Musically the song doesn't offer anything either from it's "wah-wah" Intro to the metal guitar soli. It's not even good rock music - it's simply bad, an immature waste of time. Oh and I'm sure, that that piece of crap will top the charts. And oh by the way, if you're gonna come up with a video for this opus, I already filmed it. Boys with drinks, girls in bikinis, a radio blaring, pick-up trucks and prominent Yeti coolers everywhere - am I a genius or what?