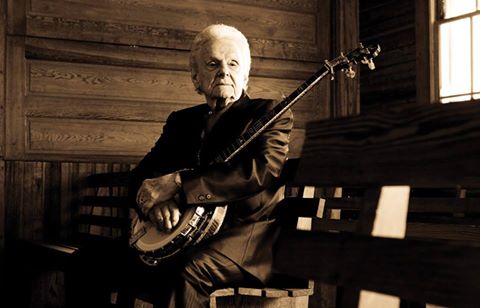 Dr. Ralph Stanley's funeral will not only be open to the public today, but will also be broadcast live on WYMT (If you click the link it will take you to the live streaming feed of the TV station).
The funeral will take place deep in the hills of Virginia at the Hills of Home Park, where the Dr. Ralph Stanley Annual Hills of Home Memorial Weekend Bluegrass Festival takes place for almost five decades. 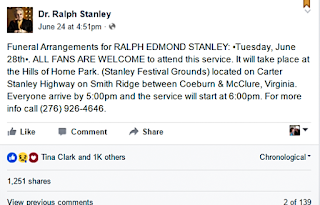 Pallbearers will be close family members, son Ralph Stanley II, grandsons Ralph Stanley III, Nathan Stanley, Evan Stout, son-in-laws Bryan Marshall and Jason Armes as well as Walter Carlton.
Honorary pallbearers will be Ricky Skaggs, Josh Turner, Jim Lauderdale, Dewey Brown, Ralph Murphy, Bobby Hammons, and all Clinch Mountain Boys in attendance.
The funeral starts at 6pm (5pm CDT, 12am Central European Time) and will feature  a Masonic Service (Freimaurer), as Stanley was a member of the masons, Frank Newsome and Eva Murphy will be officiating the funeral and VFW (Veterans of Foreign Wars) Post 8979 will conduct a VFW graveside service to honor Stanley's service in the US Army during World War II.
Clinch Mountain Boys member and former bassist (1951 - 1966), the late George Shuffler was quoted in the Bristol Herald Courier:
“That little feller left the mountains and took this music all over the world,” Shuffler said. “But the mountains never left him.”
The music videos below feature two of the honorary pallbearers together with Dr. Ralph Stanley, Jim Lauderdale in the first one doing "I Feel Like Singing Today" from Merlefest and fiddler Dewey Brown with the Clinch Mountain Boys doing "Orange Blossom Special" at Dewey Fest.