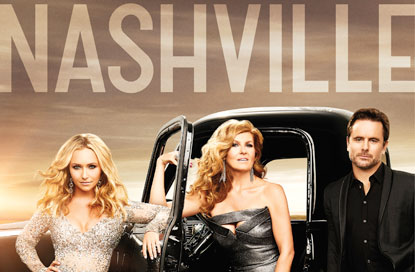 According to the Hollywood Reporter and UPI, the TV show "Nashville" which got canceled after four seasons by ABC, may have a new home. Rumors are that Viacom company CMT will pick up the show. Obviously producer Lionsgate Television is near a deal with a TV outlet, an announcement may come as early as tonight's "CMT Awards."

Other new "homes" for "Nashville" are rumored to be Hulu, Lifetime, Bravo and E! according to a report by UPI.

The series ended last month on a cliffhanger, the plane Juliette Barnes (Hayden Panattiere) was riding in back from the Academy Awards lost radio contact 90 miles west of Nashville, where her estranged husband Avery Barkley (Jonathan Jackson) was waiting on the tarmac with their newborn Cadence.

"We wouldn't take such a strong position to advocate for (the cliffhanger ending) if we didn't feel good about our chances moving forward," Kevin Beggs, Lionsgate TV's chairman was quoted by UPI.

In the meantime fans started petitions to keep the show alive, with Matthew Nelson's on change.org garnering over 170'000 supporters who would like to keep "Nashville" alive.

One of my favorite songs of the whole four seasons is the Kacey Musgraves, Chip Boyd and Jay Clementi penned "Crazy Tonight." Not only is it one of a rare shuffle in the show, but the little ditty also reflects sounds gone-by; this could have easily been a hit in the late 80s, early 90s before the gentrification of Nashville.

And I guess we all want to know if the on-and-off again relationship between Scarlett O'Connore (Clare Bowen) and Gunnar Scott (Sam Palladio) who crooned "Love You Home" in the finale, will finally expand on a personal level as well and not only as the creative musical duo "The X's." Are Rayna James (Connie Britton) and Deacon Claybourne (Charles Estes) finally able to bury all the demons and have a nurturing, not only creative relationship? Are Maddie & Daphne Conrad (played by real sisters (Lennon & Maisy Stella) gonna record together, or will Maddie continue her path as a solo-artist.