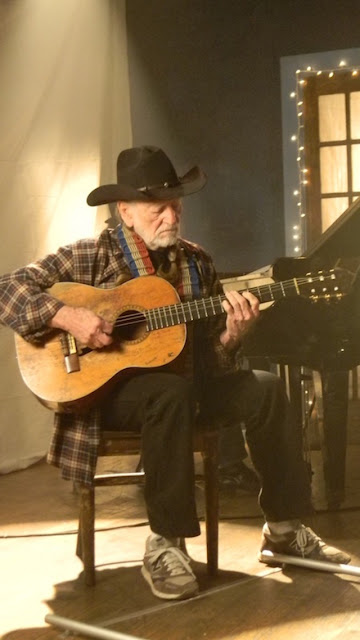 When I tell friends that I did Willie two favors in spring of 1988 in Switzerland, their first question always is: "Did you get Willie some pot and what was the other thing you did?"

No I didn't get him any smoke, even though I would have had the resources to get him some of the best Black Afghan hash, that was circulating in the air about that time. Which is bragging, that stuff was everywhere at that time and a short tram ride to a street park less than a mile away would have fulfilled his unsaid wishes.

But no, Willie just wanted to put the sweats on and go for a work out. and I organized him a gym where he could go incognito and be not bothered by other patron's of the fitness studio.
My first cover shot on a that day's major newspaper "The Sonntagszeitung" with a Willie  interview I penned with the guy who got me into the paper did it's magic too.

And while all that may have gotten me some perks from Willie and his Family (actually the late Poodie, Willie's longtime road manager)  over the years to go see some of his shows and hang on the bus, it may prevent me from applying for a job for Willie's new endeavor of selling "Willie Reserve" - yes they are currently hiring - for not being connected enough in the smoking business anymore. My THC free lifestyle for over a decade, well almost free, one or two joints a year don't really leave a piss mark on the scale, may take me out for qualifying. And then there are some other hurdles: "This position is open to Colorado state residents who currently hold or are qualified to hold a Marijuana Enforcement Division (MED) Badge."

So if you live in CO and have the required MED badge, you may apply for one of the five jobs being offered: Compliance Officer, Bookkeeper/ Admin / Office Assistant, Production Manager, Sales Director or Extractor. I just hope the bookkeeper will be a bit more spot-on with crunching the numbers and less in a haze then the former accountant that left Willie (and some of his friends) financially in the dust and in debt to the I.R.S.

Smoking "Willie Weed" as it is slangy re(e)ferred to in Austin, may get you into trouble and you may besides screwing your math up, miss out on a party you are invited to hang with basketball great Charles Barkley, as Toby had to confess to "True Country TV" in an interview . The good thing about it is though, Toby came up with a funny song, he co-wrote with his hit supplier Scotty Emerick "I Will Never Smoke Weed With Willie Nelson Again," which they presented to him on his 70th Birthday TV show special.


And when all is said and done, just "Roll Me Up And Smoke Me." Below is a live encore version from FarmAid 2014.
Talking about FarmAid, Willie also just announced the newest incarnation of the by now over 30 year old benefit event. It will take place September, 17 in Bristow, Vrigina with the following line up. Besides Willie, there will be the three other directors of the non-profit organisation performing: Neil Young, John Mellencamp and Dave Matthews with Tim Reynolds. Other acts include Alabama Shakes, Sturgill Simpson, Nathaniel Rateliff & The Night Sweats, Jamey Johnson, Margo Price, Lukas Nelson & Promise of the Real, Carlene Carter and Insects Vs Robots. Pre-sale tickets went on the market yesterday and if you want to look at the complete lineup a video stream - you can click on - introduces you to all artists.

The late Merle Haggard was part of the inaugural farm aid concert in Champaign, Illinois on September 22, 1985, so I had to include him in this story too. Roughly a year ago, the two (Merle & Willie) topped the country chart with their duet album "DJANGO AND JIMMIE" their homage to jazz gypsy guitarist Django Reinhardt and country music father Jimmie Rodgers. It was their second hit Nr. 1 together, the first one being "PANCHO & LEFTY" 32 years earlier. Watch below for the fun Willie and Merle had in recording "It's All Going To Pot," a song written by "DJANGO & JIMMIE" producer Buddy Cannon, together with Jamey Johnson and Larry Shell. But first a live version of another smoking classic by now - "Roll Me Up And Smoke Me When I Die" where Buddy Cannon and Willie Nelson were joined by the original tunesmiths Rich Alves (Pirates of the Mississippi), John Colgin and Mike McQuerry.


It's All Going To Pot