An "Up Close & Personal" exclusive program session by John Prine and Sturgill Simpson can be watched by livestream tonight (June, 21st, 9.30pm CST) on Grammy Pro's facebook page, according to a press release from the Grammy organisation and Prine.

"The artists will dive deep into their creative process, especially as it relates to songwriting, during an intimate conversation moderated by singer/songwriter and music journalist Paul Zollo." 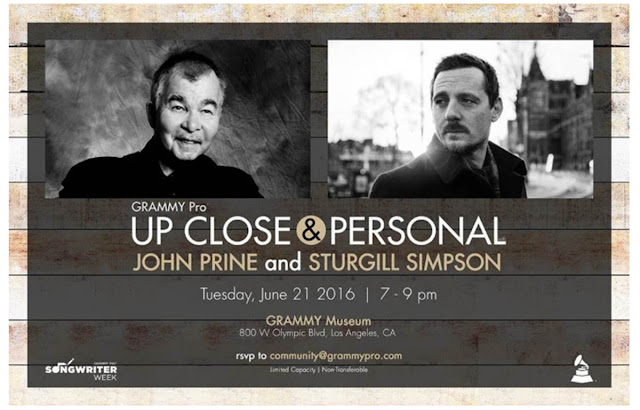 The session will be followed by a special performance by John Prine and is part of "Grammy Pro Songwriter Week" which is happening this week (June 20 - June 24) at the Grammy museum in Los Angeles. The show at the museum is sold out but is available through the livestream app which is connected to the Grammy Pro page.

Prine, who won two Grammys - one in 1991 for "The Missing Years" as "Best Contemporary Folk Album" and in the same category 14 years later for "Fair & Square" which besides mostly originals also had Prine's version of Blaze Foley's "Clay Pigeons" on it. Simpson, who is riding high on his current "A Sailor's Guide To Earth" was Grammy nominated for his previous, 2014 released "Metamodern Sounds In Country Music" as best Americana album.

Watch both artists below: John Prine together with Jim James from the band My Morning Jacket with "All The Best" on David Letterman's Late Show and Sturgill Simpson with a live version of "Turtles All The Way Down" recorded at the famous Grand Ole Opry.