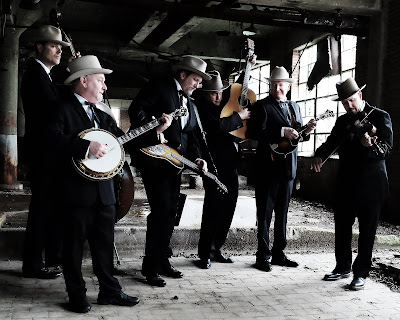 Grammy and multiple IBMA winner Earls Of Leicester will record their new, third album at the Country Music Hall of Fame in Nashville on February 24 and 25.

The sextet under the aegis of Dobro master Jerry Douglas pays homage to one of the most influential acts in Bluegrass history, Lester Flatt & Earl Scruggs (hence the name Earls of Leicester) and their group the Foggy Mountain Boys. It was original Dobro player, Josh Graves, who made Douglas pick up the instrument and start playing it. Being one of the most respected instrumentalists, Douglas always wanted to celebrate the history and the songbook of Flatt & Scruggs and found in fiddler Johnny Warren,  whose dad was a Foggy Mountain Boy, bassist Barry Bales from Alison Krauss' band, current IBMA banjo player of the year Charlie Cushman, mandolist Jeff White, who replaced original "Earl"  Tim O'Brien and singer and guitarist Shawn Camp five other kindred spirits to offer songs originally recorded by Flatt & Scruggs.

A self-titled, Grammy-winning, "debut" album was released in fall of 2014, followed by "RATTLE AND ROAR" two years later and their new live album is scheduled to be later this year. Understandably, Jerry Douglas is quite excited about the new project:

“This two night stand in the CMA Theater at the Country Music Hall of Fame is a celebration for the Earls of Leicester – as exciting as when Flatt and Scruggs played Vanderbilt University and Carnegie Hall rolled into one,”
said Douglas, referencing the two live albums Flatt and Scruggs cut in 1964 and 1963 respectively. He also hinted at what people may expect during the recordings, which will also be videotaped:
“We will be debuting songs new to our repertoire and rolling out a few surprises as we videotape and record the culmination of five years of work in our mission to re-educate, and in many cases, reveal this body of work for the first time.”

The Earls of Leicester will also tour select cities before the recording session at the Hall of Fame. So I can certainly imagine that certain new songs will be played and "rehearsed" during these live gigs.