"Pure Country" - Original Soundtrack To Be Released On Vinyl 9/15 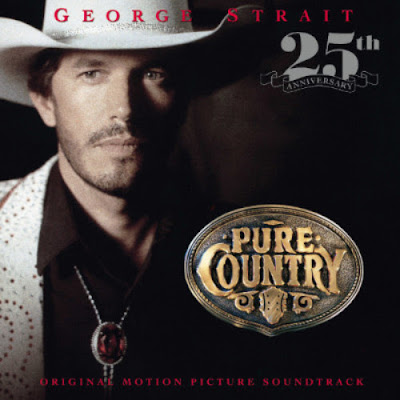 For the 25th Anniversary of the movie "PURE COUNTRY," the soundtrack will be released for the first time on vinyl on September 15. George Strait will also incorporate some of the songs featured in the movie in his two Las Vegas shows earlier that month.

How time flies, in 1992 my former editor, Christine Mäder and I went to Dallas to attend a press junket for the movie release "Pure Country." She was interviewing the main actors for our publication, Country Music, while I was covering it for Swiss Television. Isabel Glasser (Harley Tucker) was charming, Lesley Ann Warren (Lula Rogers) was a blast, we had so many laughs and George Strait (Wyatt "Dusty" Chandler)  was George Strait, slightly uncomfortable with the media thing and actually kinda reliving his movie role in the movie. Too bad, our favorite actor in the movie, Rory Calhoun playing Harley's wry grandfather Ernest, didn't make the junket.

Even though the movie was a commercial flop with just $ 15 million dollars coming in and never saw a world wide release; my TV tapes are still collecting dust somewhere in an archive in Switzerland, the soundtrack did much, much better.

Besides Greatest Hits and other Compilations, "Pure Country" is Strait's most successful album to date, with sales over 6 million units. The latest figures by the RIAA are from 1999, so I'm sure that with digital downloads we are now closer to 7 million. Talking about downloads the tearjerker hit single from the climax of the movie reached number 1 in December of '92. "Cross My Heart" (Steve Dorff, Eric Kaz) has sold almost a million copies per digital downloads since it was made available on that platform, according to Roughstock. Another composition by Dorff, who also was in charge for the whole musical soundtrack, "Heartland," co-written with John Bettis also reached the Top Spot on the Billboard Country Charts. Even though not as hokey as the movie or its main single, "Heartland" did not belong to the best material on the soundtrack, which by the way was the first album by Strait that had Tony Brown as a producer.

The real or should we say pure country song, released as the third single "When Did You Stop Lovin' Me?" by Texan Monty Holmes, who later contributed other hits to Strait, including "Troubadour," reached the top ten, but stalled on #6. But there are other gems on this soundtrack, there is a subtle countrified version of "Last In Love" originally recorded by Nicolette Larson and by co-writer J.D. Souther (together with Glenn Frey) on albums in the late 70s. The western-swing influenced "Overnight Male," first recorded by B.B. Watson, penned by Kim Williams, Ron Harbin, and Richard Fagan, who passed a year ago, made it in the charts, without ever being released as a single. I always thought the Phil Thomas/Hal Newman song "Baby Your Baby" should have been a radio single, advising the guys to better put some lovin' into their relationship. Because if you do it right, "She Lays It All On The Line," that rockabilly tinged tune came from Texas songsmith Clay Blaker and also gave him the title of his 1993 album "LAYING IT ALL ON THE LINE."

"PURE COUNTRY" also features two singles written or co-written by Jim Lauderdale, the beautiful "The King Of Broken Hearts" and the up-tempo "Where The Sidewalk Ends," which both were originally released on Lauderdale's 1991 major debut, the fantastic "PLANET OF LOVE." That first one belongs into the pantheon of country classics, also recorded by Mark Chesnutt and Lee Ann Womack, due to the times, never got the exposure, it really deserves.
My favorite track is probably the remake of an old tune, also recorded by Ernest Tubb and Carl Smith, written by Mel Tillis and Wayne P. Walker, the deliciously sad ballad "Thoughts of a Fool" with its exquisite leading steel guitar part. Not sure which of the three players mentioned in the liner notes actually brings me all that joy. But I guess it's Sonny Garrish over Buddy Emmons (who did it on Tubb's version, which you should check out as well) or Doug Livingston. It's just pure bliss of sadness.

So if you still like vinyl, like some traditional country fans do, this is definitely an album you want to put into your collection. As an extra for the 25th Anniversary, Austin movie theater chain Alamo Drafthouse Cinema will be showing the original movie in its 28 locations across the country.