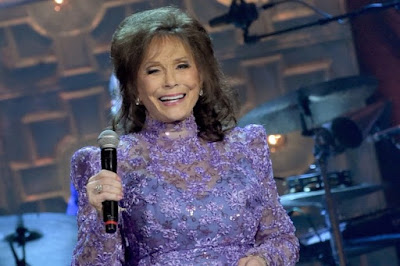 "Coalminer's Daughter" Loretta Lynn, who suffered a stroke in May, was able to leave a rehabilitation facility and is now back home in Tennessee surrounded by her family.

“Thank you so much for all of your prayers, love, and support. I’m happy to say that I’m at home with my family and getting better by the day! My main focus now is making a full recovery so that I can get back to putting all of me into what I love, sharing my music with all of you."
she posted on her website.

Besides recovering and therefore canceling the remaining 2017 tour dates, the 85-year-old singer also postponed the release of her new album, "WOULDN'T IT BE GREAT" which was supposed to be released in August to some time next year.

"I now want to wait to release it next year because this record is so special for me. It deserves me at my best and I can’t wait to share it.  I want to thank everyone for hanging in there with me. I am getting stronger every day and can’t wait to get back out there with all of you."

Produced by John Carter Cash and Loretta's daughter Patsy Lynn Russell, the album, like last year's Grammy-nominated album "FULL CIRCLE,"  offers a combination of new songs and re-recordings of some of her biggest hits, like "Coalminer's Daughter," "Don't Come Home A-Drinkin' (With Lovin' On Your Mind)." and a retake on "God Makes No Mistakes" from her 2004 album "Van Lear Rose." All of the songs, on the highly expected album, were either written or co-written by Lynn. Three of the new songs "Ruby's Stool," "The Big Man" and "I'm Dying for Someone to Live For" are collaborations with Shawn Camp, two "Ain't No Time To Go" and "These Ole Blues" were co-written with daughter Patsy. The song list for the new album also mentions an obscure song, Loretta co-wrote with Lola Jean Dillon, "Another Bridge To Burn." It may be a recording of a song, Loretta was talking about to Neil Strauss in a 1999 New York Times Interview but so far hasn't seen the light of day yet.

In her message on her website, Loretta also cracked a joke, about Willie Nelson still being around:

"I’m just letting everybody know that Willie ain’t dead yet and neither am I, and I can’t wait to see all of you on the road!”

She probably quipped the joke, as Nelson released "Still Not Dead" on his album "PROBLEM CHILD" earlier this year. But both octogenarians look at life and death intently and showcased that in a beautiful duet recording of Loretta's son-in-law Mark Marchetti penned-song "Lay Me Down" from "FULL CIRCLE."

According to family sources, she's getting stronger every day - we sure wish her a speedy recovery.