Rolling Stone's 100 Greatest Country Artists Of All Time - Do You Agree? 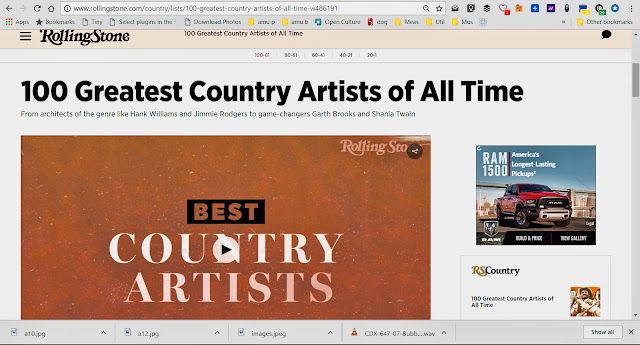 Greatest Artist compilation lists had, have and will always stir up controversy. Nothing is as sacred as your own favorite singer and when he/she doesn't make the list or is ranked in the nose-bleed section, fans feel betrayed. Part of it has to do with a social feeling of suddenly being marginalized by listening to an artist that did not make the A-List. Such compilations also always come up with omissions or inclusions that shouldn't be listed. And the new list by music publication Rolling Stone magazine listing the "100 Greatest Country Artists of All Time" does exactly what I just tried to explain.

RS asked 14 journalists to come up with the ultimate artist list, that defines country music. Well, a list like this doesn't just contain artists from last year or even the last decade. Country Music has a rich history, where the "commercial" origins of it, started 90 years ago with the so-called "Bristol Sessions" in Tennessee. Ralph Peer representing Victor Talking Machines recorded 76 songs by 19 performers during the 12 days he stayed in Bristol. Not only did the recordings introduce the traditional music of southern Appalachia, but they also generated the first two superstars, The Carter Family & the yodelln' brakeman Jimmie Rodgers of what later would be called country music. Western Swing with its probably most famous fiddler, Bob Wills followed roughly a decade later. Hollywood cowboys sang in movies and after starting in 1925, the Saturday night portion of the Grand Ole Opry became nationwide when it was picked up by NBC in 1939.

The war years and their aftermath (socially, economically) not only changed society but music as well. Suddenly songs about drinkin', cheatin' and havin' a good time were as popular as the old story songs and gospel music from before the war. A secularization of the themes started to appear, women entered the workforce and wanted to be looked upon as equal to their partners. New instruments and sounds appeared. Several sub-styles started to disappear like the cowboys in the prairies, Western Swing and other forms led to rockabilly and Rock'n'Roll. People started to go out to clubs and Honky Tonks to either drown their sorrow or to find a new honey just to dance with. The West Coast had its own California or better Bakersfield sound, that was rawer than what the by now slicker styles out of Nashville were offering. A whole outlaw movement came in the 70s when artists were fighting to keep creative control on what they want to record and want to be released to the public. With smoother Soul, R&B and Pop influences, country music was pronounced dead in the mid-80s by the New York Times only to be shook up a year later with the arrival of new traditionalist movement, trying to take country music back or at least incorporate some of its roots. New marketing ideas led country music from the clubs and dancehalls into arenas and stadiums, simple performing shows now became "circus" events for the masses. And sure enough by the end of the century, the music started changing again, less and less of what is considered having its roots in one of the many styles country music went through were abandoned. Today's major artists with a few exceptions offer a non-distinguishable contemporary sound with modern R&B, Hip Hop and EDM influences.

So what I tried to put into two paragraph synopses encompasses the whole history of country music - and I'm sure I may have omitted some sub-genres, the 14 compilers had to go through. Basically a rich 90-year-old history of what defines American music and to come up with just 100 of the Greatest Country Artists of All Time. So before you start complaining that Bobby Lee or Bobbie Lou are missing, unfairly ranked, or shouldn't be on this list, envision the above synopsis of 90 years musical evolution and history.

I don't want to leave any spoilers and rankings because you should have your own experience with the list. And I'm sure that your taste, your surroundings, your upbringing and your listening habits, as well as your age, may produce a slightly different list. So now I'm looking forward to your comments. What would YOU have done differently?

Here's a short spoiler video depicting the Top Ten of the genre.