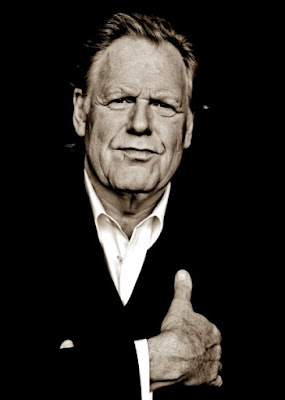 German country & trucker songs singer Gunter Gabriel is dead. He died from complications falling down stairs, a day before his 75th birthday.

According to German tabloid "Berliner Kurier" Gabriel fell on the eve of his birthday in a hotel in Herburg after celebrating with some friends his June 11th birthday. Even though he had a bleeding laceration, he thought nothing bad of it and went to bed, not realizing he had a fracture of a cervical vertebra. He had to be rushed to a hospital the next day, where he later had a circulatory collapse and passed away on June 22nd.

For many German country fans, especially truckers, he was their outspoken hero, calling things by name and using "German" to sing his Schlager and country songs. Born Günter Caspelherr on June 11th, 1942 he his first successes as a writer of Schlager (German pop songs) mostly for other artists. Beginning in the 70's he started to have hits of his own. He often took American country songs and "translated" them into the German language.

Gunter was a man of the people and for the people, songs like "Hey Boss, Ich Brauch Mehr Geld" (Hey Boss, I need a better pay) made him a blue collar idol. Heavily indebted at one point, he offered to play house concerts at 1000 Euros a piece to be able to pay off his debt. After 800 private concerts, he was debt-free. He is survived by four children, living all over Europe. He was on of the pioneers in Germany to promote country music.

Married several times, having kids out of wedlock, being a heavy drinker and then in later years sobering up - his life was more like a rollercoaster ride. In this outspoken portrait (NSFW) Gunter shares his vision of how he would have liked to die, rambles about his life and his meetings with his idol Johnny Cash. But Gabriel's persona was more David Allan Coe than aping the Man in Black.
(English subtitles)