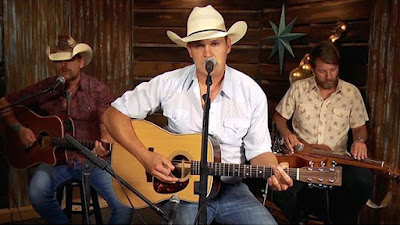 I’m excited to kick off the #ForeverCountryCovers series with my version of Randy Travis' 1987 CMA Song of the Year, “Forever and Ever, Amen" in celebration of the #CMAAwards50.

With these words, Jon Pardi commented on the above picture on his website, that he recorded a cover of Randy Travis' hit single "Forever And Ever Amen," which he recorded in celebration of “The 50th Annual CMA Awards." This year's awards will be given away on November 2, 2016. (For more about this year's nominees also read my blog "Nothing New On The Western Front."

Celebrating 50 years of awards, the CMA came up with the moniker "Artists Of Then, Now & Forever"  and started with a big bang - the collaborative recording with over 30 artists "Forever Country," which is a sound and video montage of three hits "Country Roads, Take Me Home," "I Will Always Love You" and "On The Road Again" already leapt to Number One on Billboard's Hot Country Songs chart. Not only did the compilation recording doing surprisingly well on the radio, even though some radio PDs were kinda afraid to use "old" artists, but the numbers speak for itself: the single sold over 93'000 copies in its first week, coupled with millions of streaming and video hits, the song catapulted itself to the top. Extra bonus - the profits of the song all go to music education programs the CMA is sponsoring.

Besides the collaborative effort, the CMA for its anniversary also created the "Forever Country Covers" series, where artists cover songs which either got nominated several times or were winning several awards. Jon Pardi led the pack with his rendition of the Don Schlitz and Paul Overstreet penned hit "Forever and Ever, Amen" which was the Single and Song of the Year of 1987 for Randy Travis.

Pardi can't go as low as Travis' baritone (remember "It's Just a Matter of Time"), but he does an excellent job. I really like, how the whole arrangement is kept simple with just an acoustic and a resophonic guitar. Too bad there is no info to be found on who the excellent Dobro player and guitarist/harmony singers on this take are. Travis was all excited about it and tweeted congratulations to Jon Pardi. 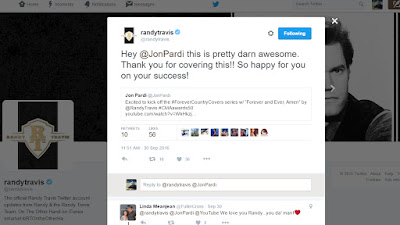 Randy Travis who is still recovering from a stroke he suffered several years ago, and who made a non-singing cameo in the above mentioned CMA video "Forever Country" will be inducted into the Country Music Hall of Fame this year, along with Charlie Daniels and producer, singer/songwriter and Monument record label founder Fred Foster.

In Jon Pardi news we can also add that his recent number one single, "Head Over Boots" was recently RIAA certified Platinum. His new single "Dirt On My Boots" was the most added single on country radio and got him with an audience impression of roughly 2 million already into the Top Fifty.