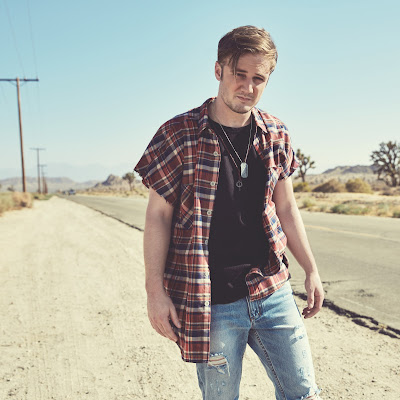 Even so he grew up all around the world thanks to his colonel dad, Seth Ennis calls Valdosta, Georgia home.

The 23 year old is the newest signee by a major label, putting ink on a contract today (9/6/13) with Arista, which belongs to the Sony Music Nashville family and releasing a first official and thematically fitting single "Woke Up In Nashville."

According to a press release, Randy Goodman, Chairman & CEO of Arista parent Sony Music Nashville, is excited to sign the new talent: “He represents everything good about our format and its future; young, energetic, incredible songwriter and performer. He’s the whole package and the real deal!”

Seth tried for some time, after funding and releasing an EP "HOPE IS ALIVE" in 2012 through crowd-funding, he moved to Nashville a year later. He also came up with a first own promo video, introducing himself to Nashville and the world.

During the three years in Nashville, he was able to get a solid team (management, publishing and booking) behind him and was now awarded with a record contract.

Seth co-wrote his debut single "Woke Up In Nashville" with a couple of heavy-hitters, David Hodges former member of Evanescence and other groups and Blair Daily, who penned hits for Kip Moore - "Beer Money", Kelly Clarkson - "People Like Us", Rascal Flatts - "Stand" and Uncle Kracker "Smile". Fellow Georgian Corey Crowder, who writes for the same publishing company as Seth does, produced the debut single. Crowder had success as a producer with a top ten digital single for Jamie Lynn Spears "How Could I Want More" and is the featured songwriter on Eric Paslay's latest two singles.

"Woke Up In Nashville" is now available at all digital retailers and can also be heard on Apple Music and Spotify. Ennis who started playing piano, when he was 7 later added drums and guitar. On his new single he played all the instruments and sang all the vocals. Even though sounding quite generic like everything coming out of Nashville, he has a nice vocal range, between Pop, R'n'B and Country. (Whatever happened to just simply singing a song and setting the accents by voice modulation and not by over-singing and over-layering the vocal tracks.) The arrangement is definitely leaning more towards a piano driven Rhythm'n'Pop side.
The lyrics are a bit syrupy but still better than a lot of what I've heard lately - the theme in it's widest sense actually has a big tradition. Boy is leaving hometown and girlfriend in search of new opportunities and success, chasing his dreams and encountering a lot of hardship and loneliness. It's no "Sunday Morning Coming Down," "Guitar Town" or "Detroit City" but it definitely has it's moments. Below are a couple of lines from different verses:

I loaded up the hand-me-down car
Went for broke, broke your heart

The song lives because of its strong lyrics, instrumentation and especially vocal over-production pull it some down, but overall it's quite a solid debut for a new artist. There is currently no word yet, if Arista will try to get the song into radio for airplay.