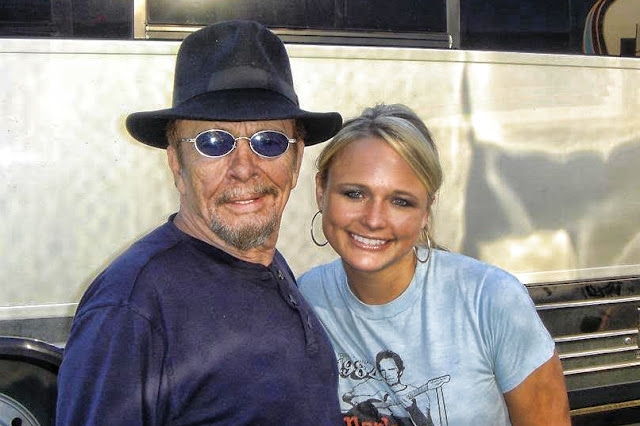 Miranda Lambert is riding high, her current single "Vice" just entered the Top Twenty Country Airplay Charts (Billboard & Mediabase), already hit the #1 spot as a bestseller (Country Digital Song) and her official Vevo/YouTube video has racked up more than 4 Million views. To top all this, the Academy of Country Music (ACM) announced today that Miranda Lambert will be the first recipient of the newly created "Merle Haggard Spirit Award."

In the run-up since the announcement of the award and the naming of the winner a week later, a shitstorm went through Social Media, everybody plus their cousin asking who is really fit in deserving this prestigious award. The latest being Sturgill Simpson earlier this morning - before the ACM announced Lambert - going on an extensive rant. Besides attacking the ACM for leaving a bad taste in your mouth by creating this award he also went into a full broadside against "Garden & Gun" magazine.

Sturgill hit the nail on top, a quick brainstorm actually did not bring immediately an artist to my mind. Maybe Randy Travis for his seminal role in the country music revolution of 1986. None of the young (and some older) whippersnappers come even close to deserve that honor.
And yes he is right about the sell-out of both organisations, the Nashville-based CMA and the West Coast-based ACM, even though the latter deserves a couple of kudos for being more honest; especially in the earlier years.

"If the ACM wants to actually celebrate the legacy and music of Merle Haggard, they should drop all the formulaic cannon fodder bullshit they've been pumping down rural America's throat for the last 30 years along with all the high school pageantry, meat parade award show bullshit and start dedicating their programs to more actual Country Music."

I can't say anything against this, he's dead on. I quit being a member of the CMA when Garth Brooks started screwing the whole industry up and left in protest. (or am I missing something?) Sturgill Simpson's attack against "Garden & Gun" magazine is understandable, it basically shows an editor-in-chief with no backbone.
Here's the timeline - May '15 Chris Stapleton releases "Traveller" - photoshoot of Merle Haggard & Sturgill is in October. In November Chris wins big at the CMA awards and it looks like he will win big at the ACM Awards on 4/3/16 as well. Sturgill's album is not out till 4/15 and nobody in February/March knows what that album is going to hold up to. So the douchebag editor chooses to go with a secure hand (Stapleton), instead of raising the odds (Sturgill & Merle). Not only would they have had the artist with the #1 album at the time the magazine came out, but they also would have had Merle who died on his birthday 4/6 on the cover. The editor just didn't play right.

So how does the ACM define the new Merle Haggard Spirit Award?

If the ACM lives up to this credo and honors only artists with "uncompromising integrity" AND have a "singular vision in carving an indelible path" we're gonna run out of awardees pretty soon if they don't start giving this award posthumously.
So did Miranda deserve it, in my honest opinion yes. And here is my reasoning, she wrote most of her own hits, from the first song "Me And Charlie Talkin'" to the current single "Vice" entering the charts. And yes she created some iconic songs "Gunpowder & Lead", "Kerosene" or "Crazy Ex-Girlfriend" doing that. Her having a side project with Ashley Monroe and Angaleena Presley as Pistol Annie's gives her some more cogency. And by standing tall and basically being the only "country" female artist still being played on the radio, she does leave a lasting mark. And yes she and Merle did have an understanding, she actually presented him with the last award he received from the ACM.

But I'm quite open to discussion - leave a comment and also mention who may deserve next year's award.

Sturgill came back later in the afternoon and had to clarify some points, one making clear, that he posted his rant before the announcement of Miranda being the winner. He also wrote:

" I know that Merle liked and respected her so it's good to see there is at least some blue sky in all of this. I don't know Miranda nor have I ever met her but something tells me that in her heart, she knows I'm dead on."

Probably true too - he then continues with his rant against Nashville and the current forces that rule. Even though being considered for a CMA award this fall, he already announced that he will not attend the festivities, not out of a mean spirit, but he has a sold-out concert scheduled that night. He also denounces the factitiousness of the whole establishment about:

"claiming to uphold and hold dear the original values and integrity of Country music's legacy. Yet these are just hollow words...merely empty semantics. One needs only to look glancingly at the majority of the music that they, along with the CMA's, predominantly choose to recognize and promote at their award shows."

He concludes with a love epithet towards the city on the banks of the Cumberland and promises to move away. I'm sure Austin would embrace him with open arms.

The awards show is tomorrow (8/30) night at the Ryman Auditorium in Nashville and will be televised in a TV special on CBS September 9th at 8pm CDT. Below is Miranda with the Merle Haggard cover "The Bottle Let Me Down."