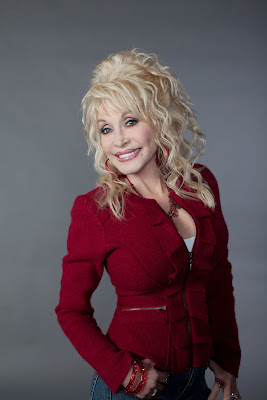 Who would have thought! Almost 30 years ago, instead of reviewing Dolly's first album for Columbia titled "RAINBOW", I played Frisbee with it. It didn't matter that I shelled out quite many Francs to buy the import, as it was not available yet from the local distributor in Switzerland. That album was simply that bad, Dolly had sold out to mediocrity, I missed songs of meaning and true story-telling. So my propane burner shaped the black vinyl round into a flying disc.

So fast forward to 2016 and I'm glad to say that her latest offering, her 43rd album "PURE & SIMPLE" will make my year-end list as one of the best country albums of the year.

No frills, no modern electronica (c)rap fuss; actually the title sums it up: simplicity, no over-production, let the pure songs - all of them written by her - speak for themselves and let her vocals shine. Dolly was also at the helm and self-produced "PURE & SIMPLE" with the help of her touring musicians and frequent collaborators Richard Dennison and Tom Rutledge.

The septuagenarian is in fine form, the range is still here and she's still Dolly, sensual and passionate. Married for over 50 years to Carl Dean, a renewal of their vows took place earlier this year, it's only fitting that Dolly releases an album consisting mostly of love songs. 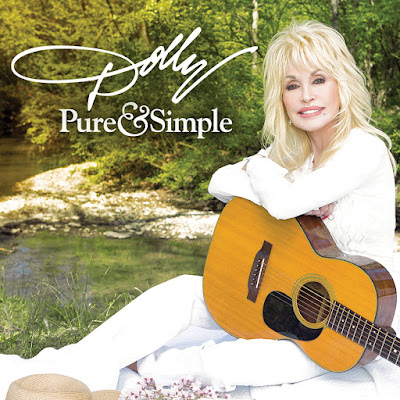 Two of the ten songs are remakes of old Top Ten Country Singles hits Dolly had together with Porter Wagoner "Tomorrow Is Forever" (#9/1970) from "PORTER WAYNE & DOLLY REBECCA" and the title track from her 12th duet album with her early mentor "Say Forever You'll Be Mine" (#5/1975). The latter one is a pure delight, just simply Dolly's voice, a guitar (Rutledge), and Jimmy Mattingly's fiddle. Other country or roots instrumentation include Mandolin (Mattingly), banjo (Rutledge), and master Paul Franklin on five songs playing wonderful steel guitar.

The opener and title track "Pure & Simple" with its arrangement of mandolin and steel guitar reminds me a bit of the Trio sessions Dolly did together with Emmylou Harris and Linda Ronstadt in 1987. (A remastered 3CD set, with unreleased and alternate versions of these and the 1999 sessions will be available September 9.)
Funny to hear Dolly Parton in "Never Not Love You" with its subtle banjo picking, sing:
I might not be in fashion, might not be all that smart; Might not be that good lookin’, not someone set apart."
As she is quoted for a long time, it "takes a lot of money to look that cheap," yes it may, but behind this blonde rags-to-riches Tennessee gal, is a savvy businesswoman with a huge heart for charities. "Kiss It (And Make It All Better)" is a cool duet with Richard Dennison, as kisses helped heal scratches when we were little kids, they now fix a broken heart.

That's where the album takes a break from love songs and offers two love gone wrong or cheating tunes. "Can't Be That Wrong" references in lyrics only, to two old hits, the Peter Yarrow (Peter, Paul & Mary) penned "Torn Between Two Lovers" - a #1-hit for Mary McGregor - and "I Don’t Want To Be Right If Lovin’ You Is Wrong” written by Homer Banks, Carl Hampton and Raymond Jackson, a hit for Luther Ingram but recorded by everybody from Bobby Blue Bland to Barbara Mandrell. The songwriting is superb and reflects the old dichotomy between sin or temptation and salvation which was always a central theme in traditional country music writing:
"To Hell with Heaven if it means I’ll lose you, Anything that feels this right can’t be that wrong. It just can’t be."
While in "Outside Your Door" the cheating part is only mentioned in one line "Might not be the right thing to do, But I swear it doesn’t feel wrong" it deals with the same theme, but has an uptempo almost frolic feel to it and the "sinner" is drawn back again and again to his/her lover.

Age is only a number and when you're in love you can feel like a teenager again, observes Dolly in the fun, groovy romp "I'm Sixteen." And Dolly does take us back to the old "golden" but also cliched days with pop culture references to the almost all by now gone drive-ins and the disappearing Tastee Freez restaurants; as well as with a line out of the Beach Boys 1964 top ten hit "Fun, Fun, Fun" "till the daddy takes the T-Bird away." The young innocence of having a little hump on the backseat of a car or to go skinny-dipping in the millpond off the town, just adds up to the fun Dolly is spreading. "Head Over High Heels" is probably the most "modern" sounding track and a true barnstormer for love. A lot subtler, but to a certain degree kitschy comes with the closer "Forever Love" and its lush strings.

As a summary - I miss some of Dolly's stronger songwriting and storytelling - "Can't Be That Wrong" and "I'm Sixteen" being the exception. Best tracks include the title track, the remake of "Say Forever You'll Be Mine," while "Head Over High Heels" and "I'm Sixteen" should get some wishful airplay on the radio. Basically, it's over half an hour of good to great country music and will not only delight hardcore Dolly Parton fans.

The album is available in several packages, which may make it hard for a true DP fan to decide which version to buy: there is the regular 10 song album, which is available on all the usual retailer websites (itunes, amazon). Besides the regular CD, Walmart also offers an exclusive package with two extra tracks "Mama" and "Lovin' You" on "PURE & SIMPLE" and a compilation disc containing 10 of her most popular hits. Home-cooking restaurant Cracker Barrel has its own special release, besides an extensive booklet the CD comes with two of her biggest hits "Jolene" and "9 To 5" recorded live in the UK at the Glastonbury Festival where she performed in front of over 100'000 people two years ago and consequently sold her previous album "BLUE SMOKE" to platinum honors. By the way, Cracker Barrel also has a 12 track compilation CD of Dolly's early material with Porter Wagoner.

DOLLY PARTON PURE & SIMPLE TOUR:
The iconic singer is currently on a promo tour promoting her new release, she actually visited the Tonight Show with Jimmy Fallon on 8/23 and performed the title track of her new album.

She will pick up the last leg of her 60-city "Pure & Simple" tour in September - her first in 25 years - first in Canada, then on to the West Coast before coming into Texas and Oklahoma. The tour not only carries the name of the album but also offers the same experience, a stripped-down show, Dolly playing everything from piano to sax, from autoharp to dulcimer.
I hope I have a chance to see her in Thackerville, OK in December - that would be an awesome Christmas gift.