From A Jack To A King - Ned Miller Passes 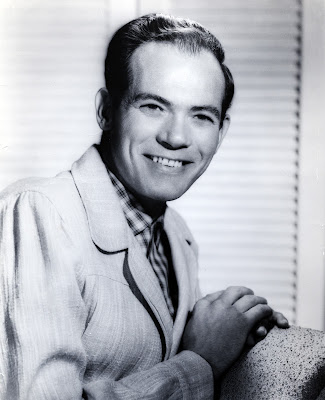 "I'll get an idea for a song," Ned Miller is quoted on his 1991 Bear Family retrospective, named after his biggest hit "From A Jack To A King" and it goes on "but then I think, 'Who wants to go through the hassle of getting someone to record it.' These days I have nothing to do with recording. My kids have nothing to do with the business. If you love shows and like to perform, it's a great business, but if you don't, you shouldn't be in it."

This pretty much sums up the short career of roughly 13 years. He then put his guitar up, quit writing songs and stopped performing. Henry Ned Miller, born in the mining town of Rains, Utah on April 12 in 1925 passed away on March, 18 in Medford, Oregon. His death which wasn't announced until this week, was confirmed by his wife of over 70 years, Sue to the New York Times.

According to liner notes, he bought his first guitar when he was nine, after splitting and selling wood. His mom taught him how to play, and he wrote his first song while still in High School in Salt Lake City. After a three year stint in the Marine Corps - he served in the Pacific theater during World War II - he went to college with the help of the G.I. Bill and became a pipe-fitter and later air-conditioning man by trade.

In July of 1956, Ned decided to try his wings in the music field and went to California where he met Fabor Robison of the Abbott, Fabor and Radio Record Companies who had discovered, developed and guided the early careers and first hits of such artists as Jim Reeves (who would later record several of Ned songs), Johnny Horton, Bonnie Guitar, The Browns and many others. Fabor saw the potential in Ned's abilities to write and sing and signed him to the label.

From the liner notes of Fabor's "From A Jack To A King" album: "The inspiration for "Dark Moon" came while Ned was driving along the Malibu, California beach one evening. Being a little depressed, he mentally drew a veil across the bright, full moon and immediately wrote the song "Dark Moon."


Bonnie Guitar recorded the song for Fabor and even - according to an article in No Depression magazine - gave up her royalties: "I knew in my mind, as little as I knew, that that was a hit song. I just knew it. So, we went right in the studio and started working on it, and I played the lead guitar and everything." 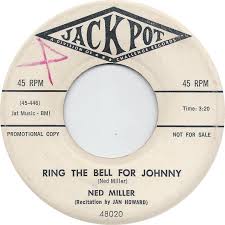 Bonnie returned the same year with "Mr. Fire Eyes" a song the two of them had written together. Other people started recording Ned's songs, but when he released "Roll O Rollin' Stone," in 1957 he didn't crack the charts, neither did he with the first time release of "From A Jack To A King" the same year. "Lights In The Street", "Gypsy" (1958) as well as the early Sixties songs "Cold Gray Bars" and his version of "Dark Moon" all failed to make a great impact.
No luck also with two songs, he recorded with Jan Howard for Jackpot "Girl From The Second World / Ring The Bell For Johnny," even though the songs got a favorable review in Billboard magazine. 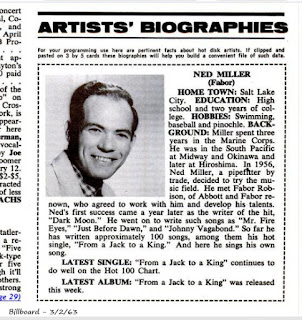 On it's second go-round in '63, "From A Jack To A King" not only became his biggest hit and signature song, but made him a world wide star. The song crossed over onto the top of the pop charts of Norway, Sweden, South Africa, Ireland just to name a few, became a #2 in the US Billboard Hot Country Singles and also made the Top Ten in the Top 100 (#6). He was featured in March of '63 with a small bio in Billboard magazine, several artists recorded their own versions of the song, where love lifts a man from being a Jack to being the King, though among others by Elvis, Slim Whitman and a quite a bluesy version by Jerry Lew Lewis as well as by a British glam rock quartet, past it's prime named Mud (watch at your own discretion.) Twenty five years later, Ricky Van Shelton recorded a remake on his second platinum selling album "Loving Proof" and took the song all the way to Number One, enabling Ned with a nice royalty retirement check. It's actually fun to watch this live recording of Shelton's version among some of the greats of country music.

Ned needed a big follow-up, and after a couple of duds came up with a song he'd written with his wife Sue, Invisible Tears. The married couple actually worked together on several of his songs, for instance "Behind The Tear," wich Sonny James took to the top of the country charts for three weeks in 1965. Miller came out the same year - now on Capitol Records with a song based on a saying he'd picked up from his father, "Do What You Do Do Well." It became his second biggest hit, reaching #7 on the country charts and #52 on the pop listings in 1965.

Do What You Do Do Well - Ned Miller


Behind The Tear - Sonny James


The crooner charted four more times albeit in the lower regions of the chart, with his sweet melancholy songs: "Whistle Walkin'" (#28),"Summer Roses" (#39), "Teardrop Lane" (#44) and "Hobo" (#53). Due to stage-fright and therefore not touring behind his songs, he got dropped by Capitol. On different labels he charted in 1968 with "Only a Fool" (#61) and two years later with "Lover's Song" (#39) and then he called it quits. Several of his songs, he has a catalog of almost 200 songs, were recorded by a big variety of stars and some even translated into other languages.

Next Time I Fall In Love, I Won't - Hank Thompson


Some of his original Fabor and Capitol albums can still be found and there are several compilation albums (CDs) out there, but if you would like the comprehensive music history of Ned Miller, I would suggest to buy the German Bear Family album released in 1991, even though e.g. his Jackpot singles are missing, it's the most comprehensive collection with a rich 16-page booklet that can be found.