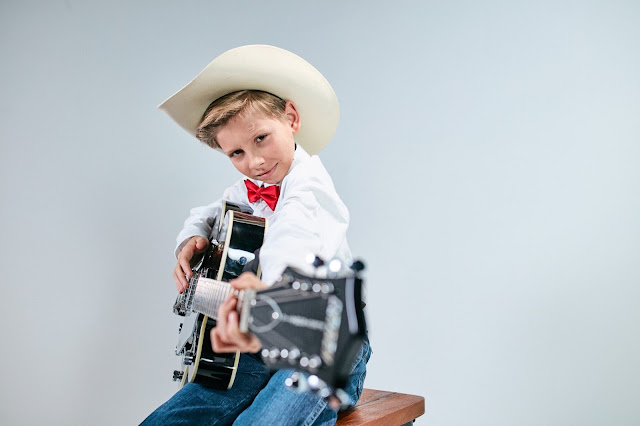 By now, everybody has heard the story of the yodeling kid, aka Mason Ramsey, whose intoning of Hank Williams' classics at a local House Of Rollbacks in Kentucky, just across the border from his home state Illinois, catapulted the video of that performance into internet virality. TV shows, a guest spot at Coachella, a first performance at the Grand Ole Opry, and now he got country-Biebered up and released a terrible debut single "Famous." All that in less than a month.

Oh, I was ecstatic like so many other traditional country music fans (aka old farts). Here was a young lad of 11-years pouring his heart out with Hank Williams' "Lovesick Blues." A little late to the game, I normally don't pay that much attention to viral videos and memes, I shared it on facebook and stated that "...this is real country. And Hank is smiling."

It seemed too good to be true, a visit on the Ellen DeGeneres TV- show, not only saw him getting a scholarship to study in the future but also made it possible to go visit and sing at the mother church of country music, The Grand Ole Opry. But that visit to Nashville bore strange fruits, the record-machinery under the auspices of has-been-artist Jake Owen and his Big Loud Records, a subsidiary of Atlantic got hold of the little rebel singing Hiram's songs and set him straight: Turning him into a Justin pop-starlet. Accused of the "kidnapping" of the boy's dream are beside Owen, Florida Georgia Line's Tyler Hubbard, EDM-pop-country garbage-writers - Corey Crowder (Kane Brown), Sarah Buxton (Chris Lane), and Canaan Smith (Florida Georgia Line) and to top the atrocities, they hired FGL producer Joey Moi known for his crimes with Nickelback.

Hastily Social Media accounts were created, suddenly there was a website, a facebook page, an Instagram showcase, and a Twitter feed. As far as I know, all these are restricted to kids older than 13 years old. But the onslaught got started and started it did - poor Mason gained over 4000 followers on Twitter per day, alone. And "Famous" his debut was released the same day, "The Yodeling Boy" was squeezed into the FGL set at the Stagecoach festival, to promote the drum-machine ditty.

Not only is "Famous" a dumbed-down, generic mass production, but its lyrics also wouldn't make a reading book for first graders. Please read and digest with caution:

Don't get me wrong, it's pretty cool to be on TV
So all the folks back home can see me
And that I'm livin' it out
All the things I used to dream about
Yeah, it's pretty great, singing on a stage
Proud 'cause there ain't an empty seat in the place
But, girl, ever since I met you
I got a whole new perspective

And people eager to know what happened to their @lilhankwilliams (his Instagram moniker) started clicking on YouTube (> 8 million) and he started to dominate Spotify (> 5.6 million) which amounts, with other streaming services, to over 15 million streams in one week. And the single is currently going to radio, which may or may not pick it up, as they may hopefully see the whole deal as a novelty factor with a faster half-life than a rotting egg in the sun.

Producer Joey Moi and the other perpetrators should be charged with musical child molestation and treason in the name of true country music.

The only good part is, that the original video where he sings his idol's song still leads with 37 million spins and Hank actually saw a 2000% increase of spins on Spotify. How sweet would it have been if the kid actually would have released a remake of a Williams' classic?
The Grand Ole Opry asked him back and Mason will make another 3-hour road trip back to Nashville to play this coming Saturday 5/12. I hope he sticks with Hank, as he got a standing ovation the first time doing it.
But as the Grand Ole Opry wrote: "Mason is rising fast in the music business." - just let's all hope not too fast, this kid deserves better.