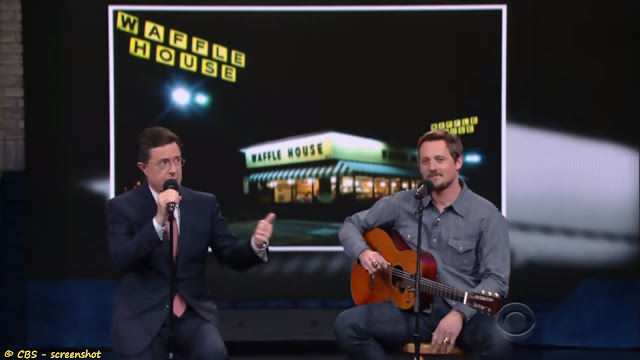 It took me 25 years of living in the States to finally make it to a Waffle House on a recent trip (March) to Atlanta. I was simply ignorant and unaware, as there are only two in all of Central Texas and Mexican breakfast and/or Tacos are everywhere and cheap.

So on Monday night, country artist Sturgill Simpson, who just released "A Sailor's Guide to Earth" some days ago, visited the "Late Show with Stephen Colbert," to perform a raucous swamp-rock, including full horn-section version of "Brace For Impact (Live a Little)."

Yet before Simpson was able to literally blow us away, he was invited and asked by host Stephen Colbert to do a "commercial" for "Waffle House." As Stephen mentioned, "Waffle House" has it's own songs on its jukeboxes, well according to slate.com, "the all-day breakfast chain that has become a Southern institution, actually has its own music label, which has produced songs such as “There Are Raisins in My Toast” for its restaurants since the mid-’80s."
As the tables were almost turned over faster than we could eat, I was never able to check out their own jukeboxes and am simply wondering what would rhyme with sausage and hash-browns.
Stephen and Sturgill's take on the unofficial song is hilarious and quite right deals with a lot of good manners missing of the late night crowds I have seen in IHOPs and other early morning breakfast places. Yes it may as Sturgill sings "You're killin' your hangover, but you're killin' my mood."

Next time I'm gonna go to a Waffle House, I'm gonna search for the jukebox. Watch the two performances below and comeback here, I will review "A Sailor's Guide To Earth" in a couple of days.