Strait Return To Stage Sold Out


After a two year absence from the stage, the King of Country rode back in to town and a record-setting, sold-out crowd of 19'222 people came on April, 22nd to the new T-Mobile Arena in Las Vegas to see George Strait in his opening show of his "Strait To Vegas" concert series.

“I’ve missed you guys and I’m looking forward to being here a few more nights this year,” Strait told the crowd early on in the night before performing for over two hours, according to a press release by Essential Broadcast Media. Besides playing a selection of several of his #1 hits, Strait also took a moment to pay tribute to Merle Haggard who was not only an icon for Strait but also a friend. “We’ll never get to hear Merle play live again, but his music will live on forever,” Strait said before performing a medley.

Kacey Musgraves who opened for George this last weekend and will for his other 2016 dates, walked into the arena with a pony. (Picture from her Instagram feed @spaceykacey) - you may also want to check out her great version of the Lee Hazlewood penned cover "These Boots Are Made For Walking," orginally made famous by Nancy Sinatra  (look on her twitter feed +Kacey Musgraves. 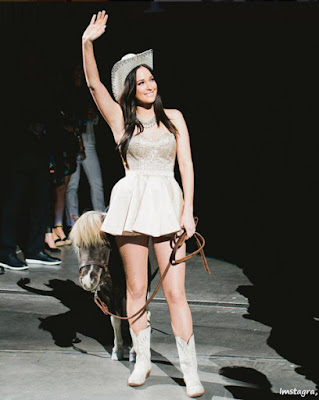 Strait will be back at the arena in September (9 & 10) and December (2 & 3) of this year and has a weekend planned in February (17 & 18) of 2017. The brand new $ 375 million indoor arena opened this spring and will host a variety of events. Boxing and fighting matches will compete with entertainment events. The Billboard Music Awards, Garth Brooks and the Dixie Chicks are all scheduled to play T-Mobile Arena.