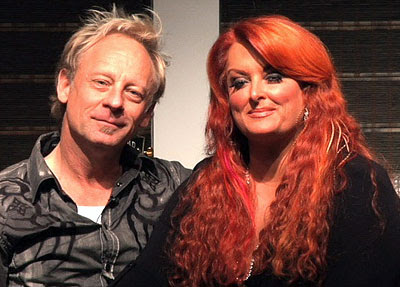 Wynonna Judd and Cactus Moser got engaged on December, 24th (2011), according to Nashville PR Agency "Webster & Associates." Wynonna, daughter of the famous mother-daughter duos, The Judds and Highway 101 drummer Scott "Cactus" Moser are presently touring together as Wynonna and The Big Noise.

I don't know how, Wynonna told mother Naomi, that she is engaged again. Maybe she used the lyrics of the Kenny O'Dell ("Behind Closed Doors") penned and first Judds' number one hit "Mama He's Crazy."


Kix Brooks (of Brooks & Dunn) and Don Cook are the writers of "Who's Lonely Now," the last number-one hit (12/30/89 - yep this week 22 years ago) for the quartet Highway 101 before lead singer Paulette Carlson quit the band and was replaced by Nikki Nelson. Cactus is pounding the felts in this video.


Big Noise, the new band behind Wynonna had its debut on November, 27 of this year at Lindsley Bar & Grill in Nashville. Some amateur clips of this rockin' show can be found on youtube.
Cactus' son Wyatt also could celebrate a debut when he was allowed to sit in with the band.