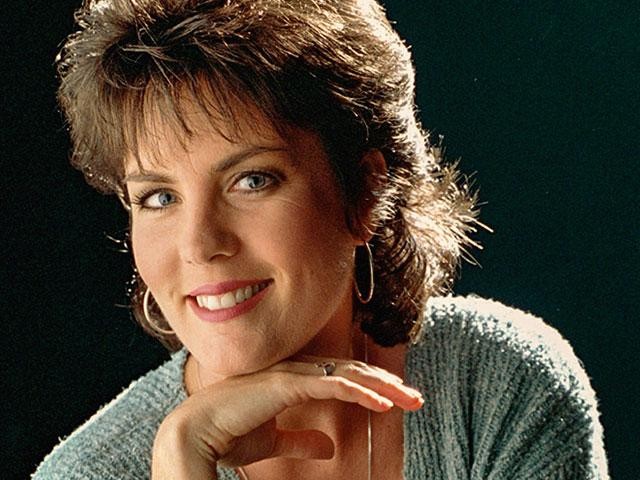 I met Holly Dunn in the early 90s, after a concert, where she was opening for Charlie Rich at the legendary Austin Opry House. Standing around, outside the tour bus and being joined by a young Paula Nelson (Willie's daughter) the three of us shot the breeze and exchanged stories.

Even though I knew since March that she was diagnosed with a rare, very malicious form of ovarian cancer, her passing took me rather by surprise. Holly was only 59 years old and spent the last decade or so, in New Mexico, where she painted as an artist and where she passed away on Monday (11/14).

During our conversation over 20 years ago, she told me how she wrote her signature song, which started her career, "Daddy's Hands" for her father, a minister, as a father's day gift. Even though the song "only" reached #7 in the Country Charts in November of 1986, she was nominated for two Grammys (Best Country Song & Best Country Vocal Performance, Female) because of it. An earlier version was recorded by family trio The Whites in 85. In April of '87 she was crowned "Top New Female Vocalist 1986" by the Academy of Country Music and in October of the same year won the Horizon Award by the Country Music Association.

Holly Suzette Dunn, born in San Antonio, on August 22nd, 1957 also told me, that their house was always open, with different musicians often coming by for a visit - Sonny James, Roy Orbison, Porter Wagoner - I recall her even telling Paula, that a young Willie used to show up too. But besides all the country music influences, she mentioned James Taylor, Carole King, The Beatles, and Barbara Streisand as influential to her music, and yes music was encouraged.  Dunn already had a band during her high school years, called Freedom Folk. According to the "All Music Guide to Country," Freedom Folk was selected to represent Texas at the bicentennial celebration in 1976 at the White House. During her years at Abilene Christian University, she was also part of the USO-touring choir, the Hilltop Singers.

Still in college, "Out of Sight, Not Out of Mind," a song she had written with her brother, Chris Waters was recorded by Cristy Lane on her "Love Lies" album. After graduating Holly decided to move to Nashville. Besides odd side jobs, she started singing demos and later writing songs for the same publisher, CBS Songs, as Chris. One of her songs, she co-wrote with her brother and Tom Shapiro, "I'm Not Through Loving You Yet" became a Top Ten Hit for Louise Mandrell, others were recorded by Marie Osmond, Sylvia, and lesser-known artists, some from Sweden and Canada. Often singing the demos, the trio wrote, Holly was still hoping for a singing career on her own.

In 1984 she got signed by Tommy West to MTM Records and released her debut "HOLLY DUNN" a year later - her first single (not available on any album) "Playing For Keeps" (Dunn, Waters, Shapiro) with a pop new-wave arrangement, stalled at #62 of the country charts, two other singles "My Heart Holds On" (#64 Hugh Prestwood) and "Two Too Many" (#39 Dunn) didn't leave much of an impact and then "Daddy's Hands" was released and gave her a first Top Ten Hit. In January of '87 a duet with Michael Martin Murphey, "A Face In The Crowd" (Karen Staley, Gary Harrison) from his "AMERICANA" album was released and not only gave her another Top Five hit (#4) but also another Grammy nomination in the duet category, which they both lost to Ronnie Milsap and Kenny Rogers. 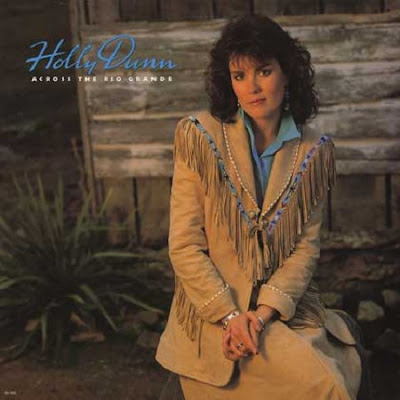 Her second album "CORNERSTONE" gave her the Top Ten Singles "Love Someone Like Me" (Radney Foster, Dunn #2), "Only When I Love" (Waters, Shapiro, Dunn #4) and "Strangers Again" (Waters, Dunn #7). Her third and last album for MTM, the self-produced (with Waters & Warren Peterson)  "ACROSS THE RIO GRANDE" had the hits "That's What Your Love Does To Me" (Chick Rains, Bill Caswell #5) and "(It's Always Gonna Be) Someday" (Waters, Shapiro, Dunn #11). After that parent company, MTM Enterprises was sold to a British TV conglomerate with the record label part being spun off, acquired, and embedded into RCA.

In 1989 Holly Dunn was added as a regular cast member of the Grand Ole Opry during the Opry's 64th birthday celebration.

Being picked up by Warner Bros, with her old catalog going there too, Holly was able to finally celebrate her two #1 singles “Are You Ever Gonna Love Me” (8/26/89 - Dunn, Shapiro, Waters) and “You Really Had Me Going” (11/17/90 - Dunn, Shapiro, Waters) from "THE BLUE ROSE OF TEXAS" and "HEART FULL OF LOVE" respectively. "BLUE ROSE" also had the Joe Diffie (w/Lonnie Wilson, Wayne Perry) penned "There Goes My Heart Again" which hit the Top Five (#4) and on which Diffie sang background vocals. Dolly Parton did the same on her cover of "Must Of All, Why." The self-penned "Anniversary For Being A Fool" stalled at #63. while the title track of "HEART", a Kostas composition, reached the Top Twenty (#19), It was Holly's last Top Twenty hit.

A duet she recorded with Kenny Rogers "Maybe" (Bill Rice, M. Sharon Rice) from his album "SOMETHING INSIDE SO STRONG" reached #25 in 1990.

With her career stalling, Warner Bros. decided to release "MILESTONES," a Greatest Hits compilation, combining her hits for MTM, with her chart singles for Warner Brothers. Talking about bad timing, the self-written single out of the collection,  "Maybe I Mean Yes" came out right at the wrong time, when the subject of date rape and the outcry "No Means No" were gaining traction due to some prominent lawsuits. With its refrain stating "When I say no, I mean maybe, or maybe I mean yes" it caused controversy. The label and Holly had to pull the single of the radio market after it reached #48. Another single from the album, written by brother Chris "No One Takes The Train Anymore" failed to chart.

The last album for Warner Brothers, "GETTING IT DUNN" was released in June of 1992. Instead of co-producing, brother Chris Waters was replaced by guitarist/producer Paul Worley (later of Martina McBride, Dixie Chicks & Lady Antebellum fame). But none of the three singles "No Love Have I" (Mel Tillis #67), "As Long As You Belong To Me" (Dunn, Waters, Shapiro #68), and "Golden Years" (Sam Hogin, Gretchen Peters #51) cracked the Top 40 anymore, and Holly Dunn was let go.

In 1995 Dunn signed with River North Records and released "LIFE AND LOVE AND ALL THE STAGES" which yielded her last single cracking the charts "I Am Who I Am" (Dunn, Waters, Shapiro #56). "LEAVE ON BRIDGE STANDING" followed two years later and by that time Dunn had joined WWWW (W4 Country) in Detroit as morning disk-jockey co-host. 2001/02 she worked for The Nashville Network (TNN) sitting in for Bill Anderson on "Opry Backstage." In 2003 Dunn released a gospel album "FULL CIRCLE" for OMS and her own company Holly Dunn Enterprises. She also announced her retirement from the music business

“I left the business because it was clear that radio had moved on and wasn’t interested in anything new from me. Without radio’s support, it just gets harder and harder to keep the wheels turning in a music career. Hit records are the engine that drives the train,”

Dunn explained to Christian magazine "Hallels" in June. Her move to Central Texas and later to Albuquerque also got her expunged from the cast of the Grand Ole Opry, a move criticized by many fans. In an interview with "the 9513" blog, Holly Dunn was quoted: 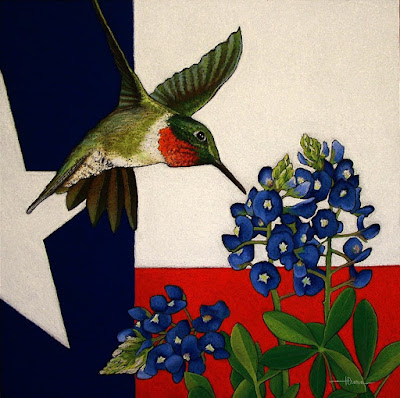 "I knew they’d been adding people since I left. But it hurt. Because I loved the Opry. And I still love the Opry."

Living in New Mexico, she started to paint, inspired by her surroundings either the Southwest or her home state, Texas (as this ruby chested hummingbird visiting the state flower, the bluebonnet.) They were offered through the Pena-Dunn Gallery in Santa Fe.

According to the New York Times, she is survived by her wife, Melissa Taylor, and her three brothers, Chris, Jerry, and Rodney. Funeral services were held on Saturday (11/19) and Holly is to be buried at the Salado Cemetery in Central Texas.