Is The Riot over - Blake and Ray meet

The riot may be over... continue reading... 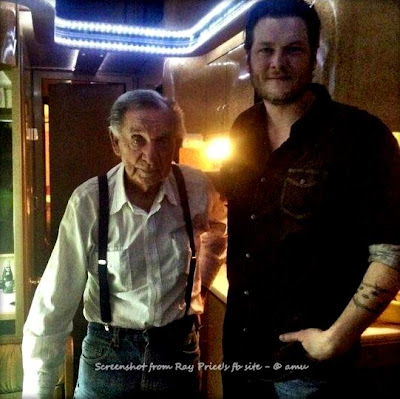 There is a new picture - taken by Shelton's wife Miranda Lambert, circulating on Twitter and some Facebook pages; it depicts Ray Price and Blake Shelton, meeting on Ray's tour bus outside of his show at the Choctaw Casino Resort in Durant, Oklahoma. Miranda and Blake obviously visited with the Hall of Famer to bury the hatchet. Miranda commented on the picture as follows "Country music binds us together! We are a family. Forever and always. Tonight was a celebration of friends and hero's (sic)." According to other sources, Blake was even introduced by Price on stage".

But the boycott is continuing, the facebook page, dedicated to boycott loud mouth Blake Shelton, counts over 1250 members by now and is still growing. As you may see, by clicking on the site, Grand Ole Opry legend Jean Shepard came out to reflect on Shellton's initial BS, and basically called him to be full of it. 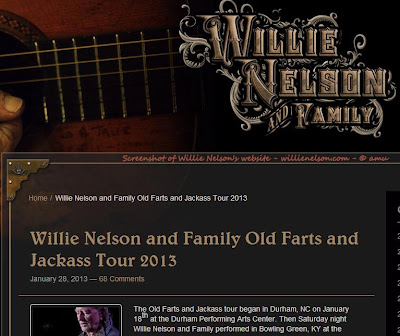 Willie Nelson renamed his current tour, he was among other shows part of President Barack Obama's inauguration celebration, into the "Old Farts and Jackass"-Tour in response to Shelton's comment (see below in original post). As self-proclaimed co-leader of the "Old Farts" party, he not only shared with us, that he was completely dressed in black by "designer" Levi Strauss, but also chipped in, into the controversy if Beyonce lip-synched at the festivities. He assures us that his music is no "Willlie Vanillie" and that he can testify in front of Congress that country music is in good hands (with him). Read more about the funny Wille updates on his website - www.willienelson.com

Next up for Blake - to reconcile with Willie Nelson and Jean Shepard. One thing that may help Blake in this undertaking is, that the original video was withdrawn from circulation because of "copyright" issues. (Really?!)

Dale Watson chipped in with a song sent from Antwerp, Belgium - enjoy


The fanpage Miranda & Blake on facebook had to close down it's wall postisngs...

The page's likes below keep on growing, adding over 250 likes in roughly 12 hours, keep on going there and click that "like"

Update (2013-01-24 11:11pm) - there is now a page on facebook that asks for boycotting Blake Shelton, I dare you to like it, the more the better...
http://www.facebook.com/BoycottBlakeShelton

Even though he told US Weekly that one of his New Year's resolution is to "keep the peace" on Social Media (as in his mouth shut and his twitter fingers numb), he stepped in a big pile of BS again. This time with a traditional media outlet, GAC TV in one of their biographical segments called "Backstory" and we are not yet four weeks into the New Year.

"If I am 'Male Vocalist of the Year' that must mean that I’m one of those people now that gets to decide if it moves forward and if it moves on. Country music has to evolve in order to survive. Nobody wants to listen to their grandpa’s music. And I don’t care how many of these old farts around Nashville going, “My God, that ain’t country!” Well that’s because you don’t buy records anymore, jackass. The kids do, and they don’t want to buy the music you were buying."

And sure enough, after offending gays, when he published rewritten verses for a Shania Twain song, and after upsetting animal lovers for killing a tortoise by just drivin' over it, his mouth needs a good washin' with a bar of soap again.

Well this time he didn't just upset a certain segment, but almost all of the people of whole genre of music, by not acknowledging the tradition and history of Country Music and basically piss on it!

That didn't sit to well, with 87-year old two time Grammy Award winner and Country Music Hall of Fame member Ray Price. After seeing the threat in "Saving Country Music," he commented on his facebook page, comparing Shelton's career as a flash in the pan and wondering out loud, where Shelton's accomplishments may be in 63 years from now.

Also commenting on the whole upheaval was Country Comedian Ray Stevens, through his publicist: "... 'Old Farts and Jackasses', all I want to know is how he found out the title to my next single because it's been a closely guarded secret here at the "Home." He also promised to release the single on vinyl or 8-Track at your nearest Tower Records store, therefore having some fun with the "old ways of music distribution."

Blake finally came out in the afternoon and started tweeting apologies from his twitter account @blakeshelton (pasted together...)

Whoa!!! I heard I offended one of my all time favorite artists Ray Price by my statement “Nobody wants to listen to their grandpas music”..And probably some other things from that same interview on GAC Backstory.. I hate that I upset him.. The truth is my statement was and STILL Is about how we as the new generation of country artists have to keep re-inventing country music to keep it popular. Just EXACTLY… The way Mr. Price did along hid journey as a main stream country artist.. Pushing the boundaries with his records. “For The Goodtimes” Perfect example with the introduction of a bigger orchestrated sound in country music.. It was new and awesome!!! I absolutely have no doubt I could have worded it better(as always ha!) and I apologize to Mr. Price and any other heroes of mine that it may offended.. I meant every word I said. Country music is my life and it’s future AND past is important to me. I’ll put my Lo(v)e and respect and knowledge About it up against anybody out there… ANYBODY…

Well nice try and I do see hand reaching out for peace, but he's still unapologetic, thinks that his words were taken out of context. He was also high-fiving fans who told him they would stand by him any which way...

Sorry Blake but in my opinion that just doesn't work. And yes your statement is not just hurtful, but also deceiving, it's the old farts and jackasses who still buy music, but it's music that matters to them from artists that matter to them. And yes people are tuning out of the commercial crap offered on the airwaves - instead they listen to more public, satellite or other radio-stations that cater to them (eg KOKE FM in Austin). Or they tune into internet stations, like TexasPrideRadio.com or have their own programs (like Pandora) on their phones, iPads or computers.

But I don't want to finish this with a sour note - below is "chief old fart and jackass" Ray Price - with the opening track of his 2002 album "Time", the lovely shuffle "You Just Don't Love Me Anymore". John Morthland wrote in his review about this album, "doesn't come across as nostalgic, but rather as the eloquent statement of a masterful artist who knows he's just not done quite yet, thank you."